Average UK house prices rose by 1% in November, taking the total annual growth to 7.1%, down from 7.6% in August.

This took the value of an average home to £240,800, up some £16,000 compared to November last year. While the rate of price growth is easing from the peak in late summer, the strong market conditions throughout the year have put upward pressure on prices.

When we examine price growth by region, the rise in values registered in the last 12 months is larger than that posted over the previous two years combined in nearly every region in the country.

The only exceptions are London and Scotland, where the average increase in value has not matched that between November 2018 to November 2020, chiming with lower rates of annual growth of 2.4% and 5.3% respectively.

In contrast, average prices in Wales have risen by 11.1% over the last 12 months, while prices in the North West are up 9.1%. Homes in Liverpool have registered the highest rate of growth of any of the UK’s larger cities at 10.7%, followed by Manchester at 8.5% and Nottingham at 8.1%.

Only Aberdeen underperforms London, with average prices in the city down 0.3% on the year. This city market is heavily influenced by wider trends in the North Sea oil industry.

Across the UK, the local authority registering the highest rate of growth is Carmarthenshire in Wales, at 13.2%. The appeal of more rural and coastal locations has been clear during the pandemic, and this market is also one of the most affordable housing markets in the country, enhancing its appeal.

Our data also shows more fully shows how the value of each home across the UK has changed over the last 12 months. The initial value of a home will determine by how much it has appreciated – the chart below shows the scale of value rises across the country.

The majority of homes have risen in value, although some properties have registered no change in values, or a modest decline. Areas which have experienced falling house prices over the last year include Aberdeen, and parts of central London.

Most homeowners, however, have experienced a lift in equity, which can act as a spur to decisions around making a move. This trend will underpin some activity next year.

On the other hand, increased prices can also make it more challenging for buyers to enter the market, although this will be dependent on where they are located, and the type of property they are purchasing.

The average price for a flat in London is broadly unchanged from early last year.

The levels of buyer demand, sales activity and new listings have slowed in recent weeks, in line with the usual seasonal trends, as can be seen in the chart below.

The bounce-back from the Christmas period slowdown is just as evident, and this will likely start from next week. Last year, property searches more than doubled after Christmas Day.

As well as the usual seasonal pick up in demand, we are anticipating that more demand will also be fuelled by a continued ‘reassessment of home’ due to the trends that emerged during the pandemic.

These include households wanting more space - an extra bedroom, or a larger garden. Alongside this, confirmation around changing working patterns for those in the workforce who are in office-based employment will also continue to act as a spur to looking for a new property.

A recent Zoopla survey showed that around a fifth of those who said they were eager to move in the coming 18 months said that new working from home arrangements were a factor in their decision.

As mentioned in the last section, a desire to lock in property price gains may also spur additional activity. The speed at which the market is moving will start to normalise next year.

The average time between listing a property and agreeing a sale subject to contract was 50 days in the years before the pandemic. This year it has been consistently below 30 days.

As the market starts to move at a more normal pace, it will be an opportunity for supply pipelines to repair, although total stock volumes will likely remain lower than the five-year average.

As we have discussed in recent reports, there are looming economic headwinds into 2022, not least rising inflation which will translate into higher household costs.

The Bank of England last week made its first riposte to high inflation rates, raising the base rate from 0.1% to 0.25%, the first rate rise in three years.

Most households who already have a home loan will be sheltered from this rise as many mortgage deals are on fixed-rate terms. However, those hoping to buy a home in 2022 may find rates have risen, albeit modestly, given the 0.15% increase in the base rate.

Overall, even with another rate rise next year, mortgage rates will remain relatively low compared to long-run averages, and many households are further protected by the ‘stress tests’ that lenders have been implementing, ensuring their household income will withstand mortgages rates at 3% higher than their current rate.

Even so, now that we are in a rising interest rate environment, there may be a knock-on impact on sentiment. We expect market conditions to normalise next year, in terms of the speed at which the market is moving and also who is moving – so after the busy start to the year, supply pipelines will have a chance to rebuild.

Even so, the demand/supply imbalance is unlikely to fully unwind, and this will be one factor underpinning pricing into next year. There is also more headroom for price growth in some of the most affordable areas of the country.

As such, our forecasts show price growth of 3% for 2022, with transactions levels at 1.2m, down from 1.5m this year but in line with trends over the previous five years. 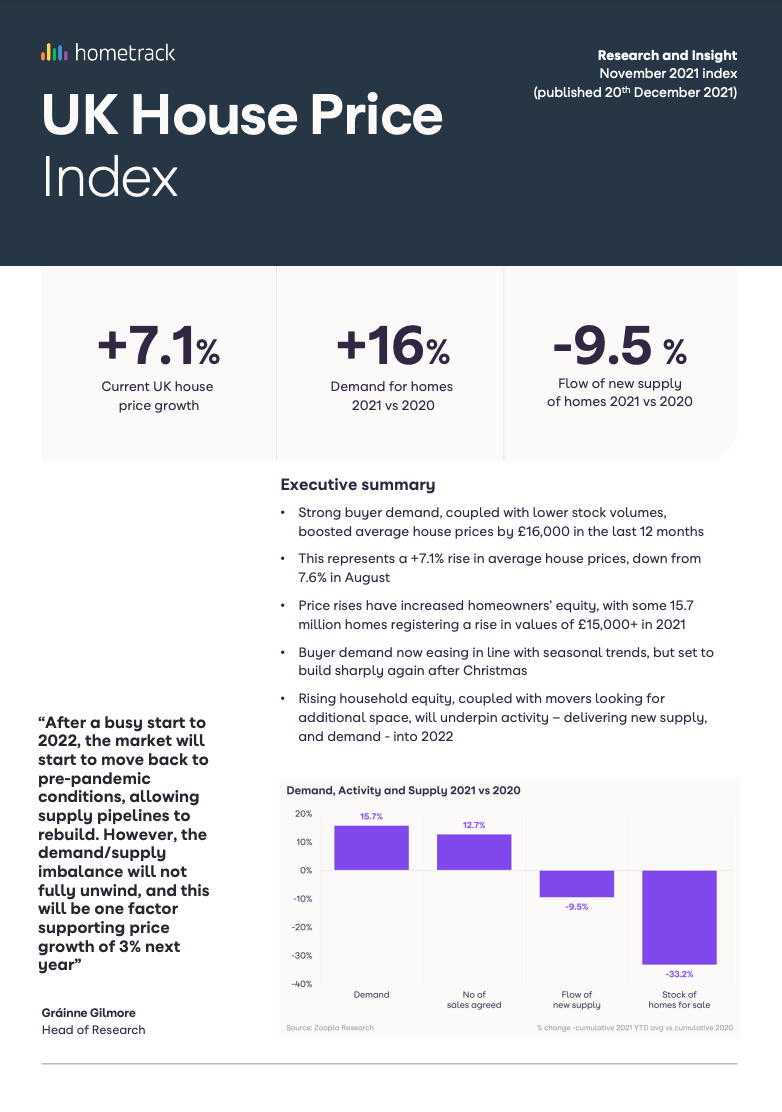 Sales market conditions are strong by any measure, but there are signals that the impetus in the market is slowing, and more price sensitivity in the market will spell a slowdown in price growth during the remainder of 2022